OPC, Kepware, DDE, Ethernet, Modbus/TCP! What Does All of This Mean? 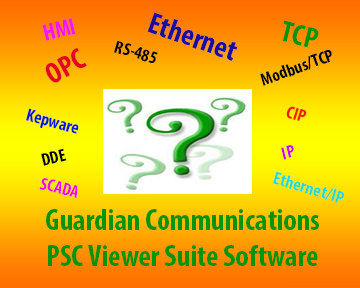 Software communication options can sometimes be confusing and complex when first encountered.  Listed below is a glossary of common acronyms, what they represent and a brief outline of our PSC ViewerSuite Software and Guardian Communications.

IP (Industrial Protocol):  The Internet Protocol is the most basic protocol. It simply moves a packet directly from one Ethernet device to another Ethernet device. Almost everything moves across the internet using IP.

TCP (Transport Control Protocol):  TCP is a protocol that creates a connection between two nodes over Ethernet. TCP maintains a connection and uses acknowledged messaging to transfer messages between two devices. That means that all TCP messages generate a reply. If there’s no reply, there’s an error.

OPC:  For old timers, OPC is OLE for Process Control.  OLE is Object Linking and Embedding.   These are Industry Standards for communication platforms so that end users and suppliers agree to exchange data in a specific format.  Now OPC is Open Platform Communications.  It is a Client / Server technology. One application acts as the server providing data and another application acts as the client using the data. OPC is a widely accepted industrial communication standard that enables the exchange of data between multi-vendor devices and control applications without any proprietary restrictions.  OPC has also grown beyond its original OLE implementation to include other data transportation technologies including XML, Microsoft’s  .NetFramework,  and even the OPC Foundation’s binary-encoded TCP format.

Kepware is the communication platform we have selected for OPC communications.  The end user needs to purchase a copy of Kepware Runtime and download for a nominal fee the system that is communicating with the Guardian (or sensor).  This is only required when customer requests OPC communication.

DDE (Dynamic Data Exchange):  DDE is a method for exchanging information between applications running on Windows.  A simple example is exchanging data between Word and Excel. It’s been working since Windows 2.0!

CIP (Common Industrial Protocol):  CIP is the basic component that forms the basis of EtherNet/IP. There are two parts to CIP, an Object/Attribute Library and a Messaging structure.  CIP devices use a very specific data model based on Objects (related collections of data) and Attributes (Data Identifiers).  CIP devices have a very specific set of messages that they support. There are Explicit Messages and Implicit Messages. Explicit messages are sporadic, one-time messages requesting data values or setting parameters. Implicit messages are ongoing I/O messages that are exchanged between two CIP devices.

EtherNet/IP is a very complex protocol but you can break it down into this; the Scanner (usually a PLC) exchanges data buffers with each Adapter. The Scanner sends Outputs to each Adapter device. Each Adapter device sends some Inputs back to the Scanner.  This is not our physical across the web scanner, it is the PC scanning the network.  The Adapter is our sensor or Guardian.

RS-485 is a Recommended Standard for local networks and multi-drop communications link that transmits data at 35Mbit/s at 10 meters and 100 kbits/s at 1200 meters.

HMI is a Human Machine Interface such as a PLC or a PC equipped with Wonderware or such.

Both EtherNet/IP and Modbus/TCP are Ethernet Application Layer protocols that use the TCP and IP protocols of the TCP/IP stack. They are both highly structured ways of moving data between automation devices in an industrial application.  The difference is in how data is represented to the network. EtherNet/IP represents data using the CIP object structure. Modbus TCP represents data as a series of registers (16-bit unsigned values).

Guardian System Communication as an Example

PSC ViewerSuite Software for the Guardian meets the needs of our customers.  Customers can get data on scan and zone averages for archiving. ViewerSuite is not only Ethernet-capable; it can use USB and serial links (RS232 and RS485 multi-drop) as well.

The ViewerSuite Software saves Zone/Average data to Excel, CSV, XML and to its built-in supplied industry standard SQLite database which is used for simple roll reports. When an HMI is controlling the Guardian or advanced options are required OPC/Kepware and Modbus/TCP are available.